Have you ever received an email from a boss that threatened you with the idea that – if they were at risk of losing their job – then they would make sure you’d be leaving the building before they did? 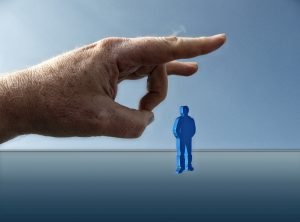 I see them quite often in my line of work – and so what I’d like to share with you in the couple of paragraphs below is how to;

First of all, let’s just recognise where all this “If I’m going down – You’re all going down with Me” scary talk is coming from.

Anyone who runs a business or heads ups a department – which is essentially the responsibility for maintaining other people’s mortgage payments / career / future prospects / business – I promise you, every single one of them will wake up at some point in their career at 3 in the morning with a pounding heart, sweating profusely, worrying about something that’s not going well at work – something that runs the risk of bringing all of their hopes and dreams crashing to the ground – wrecking their perfect lifestyle – making them feel that they have failed everyone who is counting on them – which includes everyone from close family to their most recent employee.

And if we’re talking about people who hold titles like Sales Manager, Sales Director or Heads of Sales – that fear tends to revolve around the sales target – the number that the business published at the beginning of the year and they have to hit.

If you look after the sales team – there’s no hiding from that number – at the end of the year you reach it or you don’t – Do or Do Not, there is No Try!

You tell the team what that number is at the beginning of the year – you helpfully split it up between individuals – you make sure everybody understands – and you repeat the same thing time after time – and at every sales meeting.

Everybody smiles, everybody nods – everybody takes the salary cheque each month.

And then throughout the year, that target begins to stretch further and further away from you.

That’s when regular sales meetings turn into 8 hour sessions of sales team excuses – and you over hear members of your sales team laughing in the kitchen as they’re making coffee and saying that your “ridiculous” sales target has never been achievable.

And every time you alter your plan and explain it to the team everybody smiles, everybody nods – and everybody takes the salary cheque each month.

Unfortunately, everything continues to spiral downwards – you start to suspect that the home based sales team aren’t putting in the required hours, aren’t pulling their weight – and it never feels like anyone else is taking all this as seriously as you are – and then the head honcho wants to see the entire sales management team tomorrow morning for an emergency meeting to discuss where all this is going.

And that’s when the email goes out from the Head of Sales to the rest of the team with that scary threat – “I’ll take you all down with me!”

It’s a last gasp attempt to make people realise that all this is real – and comes from desperation – the kind of frustrated rant that people have at a laptop when it unexpectedly updates half way through important work that needs doing right now.

So what’s the solution?

Do You Just Do More of the Same for Longer and Quicker?

The “I’ll take you all down with Me” email usually assumes that the plan is fine – it’s just that nobody has been implementing it – but that’s rarely true.

The message to the team essentially says;

“There’s nothing wrong with the strategy – you’re just not doing enough of it – do more of it – and do it quicker than you were doing it before. You’re all just lazy!”

Well that’s got us all on side hasn’t it? Thanks – I’m truly motivated now.

Actually it either scares people to death or makes them shut them down.

A few pick up the baton – but that’s pointless too.

It doesn’t matter how much junk food you eat – you never reach a tipping point where it suddenly becomes healthy.

If your diet is making you unhealthy – you cut out the crap.

And if your sales strategy is causing you to have sleepless nights and isn’t winning the required amount of business – just doing more won’t help!

It doesn’t matter how high you climb a ladder – if the ladder is up against the wrong wall!

During my FAME (Focus; Accountability; Motivation; Education) Masterclasses for Sales Managers, I explain that – when things aren’t going to plan – you have to work out whether the team are struggling to do what you’re asking them to achieve – which would be a Capability problem.

Or whether they know what they should be doing and how to do it – but just choosing not to – because that would be a Culpability issue.

And the truth of the matter is this;

Very few people set out in the morning to deliberately sabotage the business that employs them!

Bad apples and trouble makers are usually discovered and turfed out – and lobster people always get shown up for the naysayers that they are eventually – but the rest of the workforce, people like you and me – well, they’re a group of decent people, people who are just trying to do an honest days work – doing the best they can, with the skill-set and knowledge currently available to them.

And here’s the bit that some Sales Managers and Directors don’t like to admit (or hear);

Culpability is always the sales person’s fault and choice – however, ensuring that the Sales Team have the Capability to deliver that which is required – will always be the job and responsibility of Management.

I don’t want to over simplify this – especially when there are people sending out angry emails, waking up perspiring at ridiculous hours of the morning and worried about losing their jobs – but the answer lies in one (or all) of these 3 camps.

Your sales team are restrained by time – we all have the same hours in a day – how they spend that time has a direct impact on how close they get to hitting target.

How many prospects can your team comfortably look after – from the start to finish of the sales cycle in a year?

When you have that number – what is the average amount of business required from each of those prospects to ensure they hit target?

Is that the size of opportunity and number of prospects that your team are calling on?

Have a think about your current customer base – do these new prospects have the same need for your product or service?

What do your sales team need to be able to do next week, that they weren’t able to do last week?

What have you put in place to ensure that improvement takes place and becomes a habit?

Just saying – putting it out there – don’t get upset;

But have you considered that maybe your plan isn’t quite working out how you thought it would – and that maybe the failure to hit target’s got absolutely nothing to do with the sales team?