How to Become a Bad Ass Sales Superstar …. (Without Having to Sell Your Soul to the Devil)

When you’re in the middle of a sales storm – standing right in the eye of the hurricane, it can feel like you only have two choices.

Which is fine as long as you’re comfortable with your monthly sales results always ending up just short of acceptable, while secretly hoping for some fluke to land in your inbox while you just keep pressing send/receive for hours and get used to feeling your stomach sink every time the boss invites you into her office – or

Live for today – fill your boots, empty your soul – while the successful people keep telling you, “it’s not personal – it’s just business”, right?

That’s a two-sided coin I got very used to flipping – always wondering if it was ever going to land on its edge and give me a third option.

Back when I started in sales (my first B2B job was selling photocopiers in the early 90’s) I couldn’t even close a fridge door properly, never mind a genuine sales opportunity.

My career was hanging by a thread – I started off nice, turned street hustler, tried hard-nosed trader – in the end, I didn’t care what I was going to turn into or become – I just wanted to be successful.

Not for the money – I could live without the money – I just wanted to walk with the swagger that the successful people had – I wanted to be the top guy on the White Board.

But no one seemed to be able to offer any advice that helped in any practical way what-so-ever.

I remember my sales manager giving me a pep talk at the pub after my first week. He said it was;

“all about numbers – put in the effort and sales will follow”. 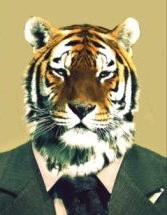 5 days later and I’m at the annual sales conference (throwing down the third lot of vodka shots with the uber-successful Southern Sales Team – oh, how I longed to be like them) which was when my Sales Director told me success was actually all about;

At which point I distinctly remember hearing one of the Southern Sales Team roaring like a tiger.

Week 3 and they’re sending me on a sales training course.

A full week of how to manipulate and control my fellow human – slicing away my sincerity, morality and basic humanity with scalpel like precision – all driven home with a series of combative role plays, recordings of various sales situations and a rigid step-by-step structure that guided me along a path that was not to be deviated from.

I was then sent home with what I thought was a “magic set” of previously unheard of sales tricks and ninja business tactics.

I found out (during my very first appointment back on patch), it was just macho sounding theory that worked perfectly in a sterilised training environment. Theory that my prospect, the MD of a northern printing company, had heard and seen many times before.

* Actually, he even pointed out the exact chapter of the training manual that I was up to during my sales pitch *

Now don’t get me wrong, I was keen – in fact I was super keen.

I was always in the office 15 minutes before everyone else, my shoes were shiny, my suit was pressed, my tie was a perfect Double Windsor and my CRM system (which spat out large reams of green perforated paper) was all up to date, with the day’s contacts laid neatly on my desk.

I spent every morning knocking on 50 or more doors – across a vast area of industrial estates and town centres – collecting compliment slips, asking questions, taking notes – and then I’d get back to my “white writing on a black background” computer screen and load up the data, before spending the rest of the day calling my leads and trying to book appointments to fill my diary.

But after two months, all I had achieved was the single sale of a small fax machine, to a family firm that made air fresheners for public toilets.

So, what didn’t I know then – that I learned the hard way – and know now?

Well the truth is – just about everything.

But once I started to build my sales success on top of a couple of genuine foundation stones, my life got sooo much easier.

No more wrestling with my conscious – I didn’t have to – and no more sales meeting worries either.

No more thinking I had to take easy money off nice people just to hit target – I didn’t want to and I didn’t have to – so no more worries about my bank balance at the end of the month.

No more wishing I was like the uber-sales guys – just happy in my own skin and bringing in bigger numbers than every single one of them.

I got some great advice from someone worth listening to – someone who had actually been there and dragged themselves to the other side – genuine, great, real-world advice.

He showed me exactly what to do…

If you’re struggling to hit your sales target – and the 3 steps above sound too obvious to take any notice of – then I strongly suggest you find someone who will take the time to explain each one to you properly.

These are the first things I help everyone who attends my City Masterclasses and Bespoke Workshops to understand;

You see, you don’t leave one of my workshops with a structure or a script that restricts your movement or hides your humanity.

But everyone does walk away with an overflowing sales toolbox – something they can reach into whenever they feel the need to.

Something so flexible and natural that customers feel they’re part of a two-way conversation with someone who is actually trying to help them.

The prospects and customers of the people who attend my workshops never feel like they’re being taken for a ride by some kind of walking sales cliché.

And the people who put these foundation stones in place reach amazing levels of success without ever feeling they had to trade the good part of themselves in order to get there.

The next Business Development Masterclass dates have just been confirmed in the diary – I look forward to seeing you at one of them very soon.